Living for the weekend

Anything but for the protagonist Eoin Carey...
....our story picks up with him at his computer, destitute, not hours from his last post...

Saturday: the day of play. OR the day of rest. Mainly: the day of choice. And what a choice in Scotland's capital! Should you chose to stay in it at all that is and give its lush, undulating surrounds a miss, the curious winding terrain and its friendly denizens prove ample for a young man to while away his hours in trendy luxury. Why could it be then on such a prosaic day for the many, did our protagonist find himself on the verge of nothing to do what-soever!? Try as he may, his fine woman abroads and with money in his belt, could he not find a tuppence of play to be had?

His finest coat and hood aboard, not a chance encounter could he tempt. Dispersed of destinations, he took to the streets, a man about town, waiting for fancy to take him. But take him it didn't, and he soon felt the pull of lethargy at his slacks and the chill of inertia there at his heels. Many a steamed up moonshine he passed, already at capacity. No room for an extra. Not a stranger at his phone's end.
Food then, the priority rose. And onward he searched: something fine to be treated, but something comely, some damn place that could welcome an odd fellow at his leisure, and his book to boot. On and on, traversing the pinnacle of George's and sinking down down, into the bowels of the new town.
Finally fed and ale'd, but yet not satisfied, on our hero marched. Casting aside his intellectual feather and stretching through the bars of ignorance, he wound up at hells door, where he long knew he would. He paid the price to enter. He was charged a surplus for the glasses. And reduced now to a child, he sank away and hour and four halves in the dark, numbing world...of Avatar.

Emerging onto the streets, cold with night, he stumbled on. No trace of his former self...except a pair of darkened 3D shades..obscuring his torment and making him appear visually impaired. 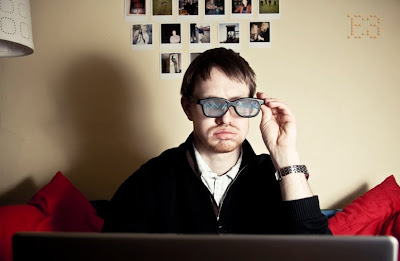